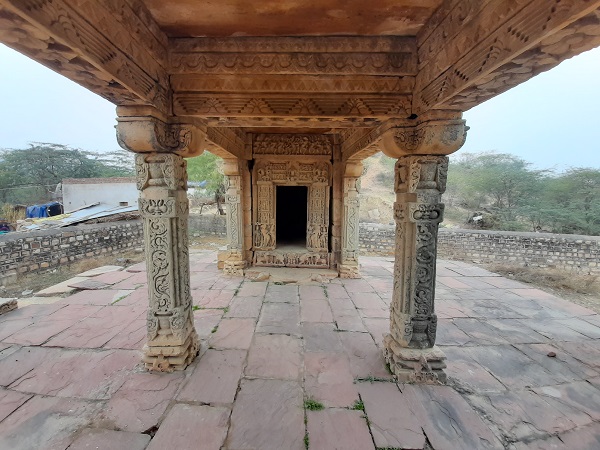 When I first visited the Morena region nearly fifteen years ago, with a focus on the sites of Mitaoli, Padhawali, Bateshwar and Kakanmath, those sites were little-known. Today, while those four see plenty of visitors, not just from nearby Gwalior but also from the national capital, it is time to talk of the larger heritage zone they lie in. A zone that contains many more 11th-12th century Kachhapaghata style temples. Mitaoli, Padhawali and Bateshwar are in proximity to each other, but they are not just three sites, but part of a massive zone of temples that spreads over nearly 50 kms. Here is a snapshot of some of these hidden shrines:

AMLEDHA: Located a short drive from Mitaoli, Amledha village houses a small, flat-roofed shrine on a platform. Its doorway and walls are embellished with a range of sculpted figures, such as Brahma, Vishnu, Shiva, Surya and more. The area around is filled with temple remains. Carved elephant heads lie next to a tractor, a broken Shiva linga is seen near a cattle-shed. What arrests an explorer’s interest is a huge stone platform, once the base of a large temple that existed here. The existing small shrine and fragments around may have been tiny parts of this lost temple but look like stragglers from history now.

Above: The temple at Amledha and a part of a temple lying in the village

BHENSORA: Beyond Amledha, a drive along a canal brings one to Bhensora. At first glance, the Shiva temple bears a superficial similarity in size and design to the Amledha one but a close examination reveals much more. The Bhensora temple has suffered severe damage at some point and what is left is the garba-griha with the mandapa entirely gone. But damaged as it is, it’s magnificent carvings are a sight to behold. Moreover, the boundary wall of the place has many carved pieces embedded into it, perhaps done by the villagers to prevent their theft. It is heart-warming to see the shrine still in worship and being the focal point of community life in the village, a role it would have played in its glory days.

Above: The temple at Bhensora with carved fragments embedded into its outer wall by locals

ARDONI: In contrast to Bhensora, the ancient Shiva temple at Ardoni is largely ruined with two walls and a few pillars left standing. The highlight is undoubtedly a magnificently carved Ganesha, perhaps illustrative of how magical the shrine would have been centuries ago.

Above: A magnificent carved panel with a Ganesha at the outskirts of Ardoni village

BARAHWALI: The Vishnu temple at Barahwali is a large 11th century CE one that stands proudly in the center of the village as its community shrine. It has seen significant restoration and the current structure is a curious mix of the various hands that worked on it over centuries. A small shikhara rises over the inner sanctum while the mandapa retains its original pillars, though a more recent roof has been mounted on it. The temple is dedicated to the Dashavatara, or ten incarnations of Vishnu – with the Varaha incarnation passing on a name to the village, mutating to ‘Barahwali’ now. In front of this shrine is a small chhatri with a linga within.

Above: The Vishnu temple at Barahwali, which has probably seen modification over time

AITI: A visitor coming from the Malanpur side gets his first glimpse of Aiti’s heritage in the form of a 11th century Vishnu temple at the outskirts. Standing in a walled compound, it’s mandapa is partly ruined while the inner sanctum is better preserved. This ornate Kachhapaghata shrine is a jewel box of iconography, depicting Brahma, Vishnu, Shiva along with the Saptamatrikas and Navgrahas.

Inside Aiti village is yet an equally beautiful Shiva temple, of the same period. Popularly called the Athkhamba, this is an entirely covered shrine where the inner sanctum is in the middle of a pillared hall.

Above: The Vishnu temple at Aiti

Above: Ornate gateway of the Shiva temple at Aiti

PAROLI: Our last halt on this journey of temple discovery is at little Paroli. Inside this hamlet is a group of small Vishnu temples, largely ruined and serving as a place to store cattle fodder. But in a tiny spark of hope, the villagers have come together, collected fragments lying in fields and are putting together a ruined temple. As this ancient shrine comes together like a giant jigsaw, the effort behind the undertaking has brought the entire community together. Perhaps that’s why the temple was originally built.

Above: A temple being reconstructed at Paroli using fragments of lost temples found in the village and fields around