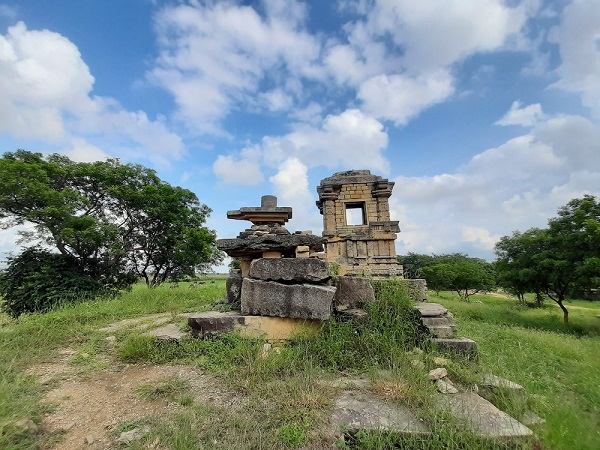 The first thing that comes to mind when one thinks of Morena is a picture of heavily armed dacoits galloping through the Chambal badlands. Given the area’s past history of dacoit infestation, that picture is natural. But as seen in Mitaoli, there another face to the district – a face that comprised priceless historical monuments lying scattered throughout.

Close to Mitaoli lay the village of Padhawali, with Bateshwar just beyond. I will describe Padhawali here briefly, leaving Bateshwar for another day. Driving through Padhawali village, I arrived in front of a fortress-like structure – a garhi – most unlike a temple. The outer walls of the mini-fort have rock carvings on gods and images of creatures from Hindu mythology made on them.

Above: The Padhawali garhi from outside

Entering the fortress via a flight of steps flanked by two large stone lions, the first structure we saw was the temple, which is visually aligned to the entrance. The temple no longer has an idol and parts of it have collapsed. In the absence of a back wall, it has become a ‘walk-through’ structure. But even with all this damage, it remains glorious.

Above: The shrine inside Padhawali fortress

Carved in rock inside the temple – on its walls and on every inch of its ceiling – are a range of Hindu gods and mythological figures. On one wall is the goddess Kali, on another is the Brahma-Vishnu-Mahesh triad and so on. It is obvious that hundreds of years ago, the imagination of some artisan thrived here, leaving behind a riot in stone for posterity to admire.

The temple is the central structure of the fortress, which seems to have been built for the sole purpose of protecting the temple and its riches. There are some rooms, which may have been used by some king during a visit here. In the courtyard behind the temple, priceless rock carvings of deities lay scattered in large number. An opening from the right of this courtyard leads to another, larger one. Around this courtyard are rooms, which may have housed temple attendants or guards and a water tank to sustain them.

Sihoniya, also in Morena district, was explored the next day. It had been an important town during the reign of the Kacchapaghata dynasty and in the 11th century CE, they had built a Shiva temple at Kakanmath near the town. An inscription taken from Kakanmath, now in a museum in Gwalior, mentions a Kacchapaghata ruler called Kirtiraja as the patron-builder. Today, Sihoniya is a sun-baked village known more for its Jain Temple.

Kakanmath temple lies outside the village. My research had told me that it was 155 feet high, but visually it looked taller. More than its size, the remarkable thing about the awe-inspiring temple is that it looks fragile and if appearances were anything to go by, a gust of wind could blow it away.

Built on a raised platform, its fragile appearance is the result of some parts of the structure having collapsed. At some point in history, it has also been attacked – some historians attribute this to the Slave dynasty ruler Iltutmish – as a result of which a number of rock carvings on its walls have been defaced.

Similar to the Khajuraho temples in design, Kakanmath is pyramid-like in structure with a pillared corridor leading to the central shrine. The structure includes a sanctum, a vestibule and two mandapa halls. On one of the pillars is an inscription dating to a later period than the 11th century – perhaps an indicator of the temple being a central shrine even to later dynasties. The shrine is filled with stunning Hindu iconography.

To the right of the temple are the remains of other, smaller shrines including a Shiva linga standing by itself. The overall effect of the towering structure standing in the middle of fields is stunning and would never cease to startle a chance visitor to Sihoniya.