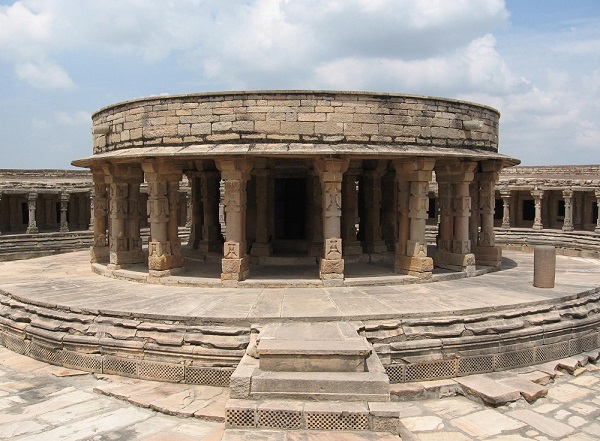 the temples of morena – I: mitaoli

It was in the monsoon of 2006 that I first made the journey to Mitaoli. Back then, the drive from Gwalior took longer, parts of the road’s last stretch resembled Balakot after an IAF visit, the destination could not be found on GPS and few locals had even heard of the place.

2006: The first glimpse of Mitaoli hill

Fourteen years on, Mitaoli finds a place on the tourist map, though not quite the prominence it deserves. Visitors to the place are drawn to a temple here. A temple that sits on a hilltop. A structure that is unique in its design, at least in this part of India, any others of similar design having long been destroyed. At the base of the hill is a small settlement, the residents of which always seem mildly surprised to see visitors in their tiny hamlet. Spread through the settlement are fragments of temples, including a Nandi.

Fragments of temple remains lying in the village

A curving path leads up the hill. The top is largely flat and the visitor’s attention is instantly arrested by a circular structure. Built in the form of concentric circles one inside the other, this is the Chausath Yogini temple of Mitaoli.  If seen from the air, the temple looks like a giant wheel.

The Mitaoli temple from outside

Its outer walls have traces of embellishment, such as geometric patterns and depictions of Shiva-Parvati, their faces defaced. On the inside, the temple wall is ringed with a pillared corridor. Small rooms are built at uniform intervals into the outer wall, opening onto the corridor.  In each room is a small Shiva linga. Beyond the pillared corridor is a large courtyard in the middle of which, on an elevated platform, stands the inner shrine. This too is circular in nature.

Entrance of the temple

Embellishment on the outer wall of the temple

There are many interesting, even odd, aspects of this temple. Perhaps the first among these is that not one of the Shiv lingas in the rooms along the pillared corridor has a yoni pitha – the base of a linga. This lack of yoni pithas make the lingas look baseless in their rooms, compounded by the fact that none of the rooms have any trace of the Yogini idols they would originally have housed. In fact, barring the lingas, the rooms are bare, the only iconography being on the doorways. Were the lingas placed here at a later date? And where did the Yogini idols go? Had they been destroyed at the site itself, some fragments would have been remained. Just some of Mitaoli’s many mysteries that no one has an answer for.

Panoramic view of the temple from within: a central shrine surrounded by a pillared corridor

Another interesting aspect is that in a Chausath – meaning 64 – Yogini temple, there are sixty five rooms for idols that existed here. Was an extra room meant for a larger, possibly central idol? Also, a Yogini temple would normally have Shiva and his entourage depicted in the central shrine -as observed in such shrines elsewhere in the country. At Mitaoli, the central shrine has no iconography left, leaving people guessing.

Speaking of the temple’s structure, part of the hill fell to erosion years ago, taking with it part of the outer wall and a few of the rooms. Since 2006, the ASI managed to put back some rocks on the hill and rebuilt the crumbing part of the shrine. Today, a lay-visitor would not be able to make out the newly built part.

2006: The shrine with a part of the outer wall having collapsed

2011: The outer wall repaired, with no sign of the earlier collapse

Close to the temple is a smaller shrine, of the same antiquity.

The temple has various inscriptions on it, across eras, making it a repository of the region’s history. The first of these, perhaps the most important, is partly damaged. According to historian Vidya Dehejia, this inscription written in 1323 CE mentions a Kacchapaghata dynasty ruler, Devapala and his queen. The area was part of Devapala’s kingdom in the mid- 11th century, meaning that the inscription was written nearly 250 years later. As per Dehejia, the last dated inscription was added in 1503 CE, indicating that the shrine remained in worship then.

Mysteries aside, perhaps the most striking aspect of the temple is its visual similarity to another, better known building of India. The circular design of the temple bears an eerie similarity to that of the Indian Parliament. Did Herbert Baker use this structure as a template for his grand design of the Parliament? Maybe that’s why some locals call the Mitaoli temple ‘Shiv Sansad’. Some others call it the Ekateshwara. Maybe it is best to stick to Chausath Yogini, in a tribute to the departed Goddesses of the shrine.