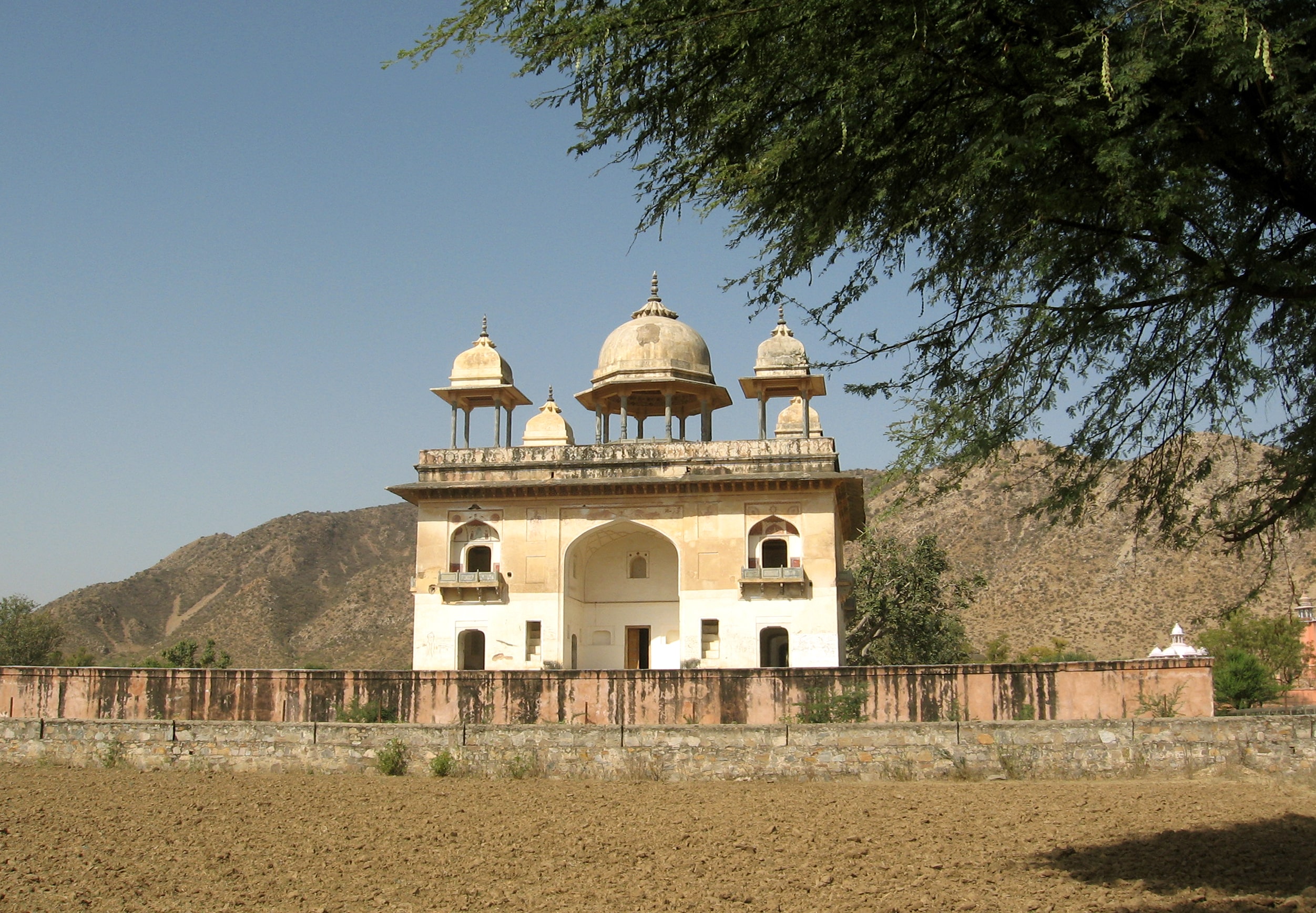 A chance encounter with medieval art

The ambience of art galleries is usually made up of sanitized halls, soft instrumental music and elegant flower arrangement. There is a person to walk you through the subtle features of each composition and if you are a special guest, the artist would himself turn curate for you. But that is for regular art galleries.

When you are standing inside what appears to be a richly decorated Rajput hunting lodge set in the middle of cultivated fields located close to a thicket, such niceties fall away. You may be admiring medieval wall paintings but there is no curator to guide you. The best you can get are local cowherds who call the building a ‘Mughal Gate’ and do not have the least understanding of the ground they have been treading all their ignorant lives.

To understand this interesting art gallery better, let us start at the beginning. For me, it all began while leafing through a book on Mughal Architecture by Ebba Koch. The authoress, while describing the art of a certain period, very briefly mentioned the building at Bairat with a picture as support. That was all I needed to begin searching for the place.

Time has changed many things. Bairat has now become Viratnagar, which people speak of as the original name of the place thus giving it a Mahabharat-period pedigree. At the time when the hunting lodge was built, the old road from a Rajput Jaipur to a Mughal Delhi would have passed quite close to it. Even today, it is but a short drive from the national highway connecting the two cities. I began the trip to Viratnagar early morning from Jaipur and reached the place in a short while. At the outskirts of the town was a board indicating the places of interest there. There was no mention of any hunting lodge or similar structure. It did point out the presence of the remains of a Buddhist monastery site nearby which I proceeded to examine.

Thereafter the hunt began in right earnest. The board mentioned a ‘Mughal Gate’ which sounded strange to me. The Ebba Koch book was taken out and the picture shared with a few people. The picture had been taken way back in 1982 and given that much could have happened to the building since then, I held my breath only to have it restored to normal by an elderly policeman who affirmed that the building in the picture was indeed the so-called ‘gate’. The structure was finally located at the outskirts of the town in proximity to a modern Jain temple.

The building had survived over a quarter century of time since the picture was taken without any change in its outer structure. In a country where few people understand heritage and fewer still respect it, this survival was remarkable. The structure had been given a protective wall around with a gate for easy access. Children played in front of the building with a few goats for company. A couple of cows munched around nearby as their herders had forty winks under a tree. There was little to hint that I was at a special place.

But the place was indeed special. Its exterior with a few decorative paintings was interesting but held no promise of what lay within. It had two levels with a mezzanine in between. At this middle level, it had four rooms in each of its four corners. Each room was accessed via a different staircase, which lead further on to the roof. Climbing into these rooms one after the other, I came across a breathtaking riot in wall paintings. Covering the walls on all sides and going onto to the ceiling were paintings of warriors engaged in battle, men out on a hunt, ascetics at prayer, powerful wrestlers jousting, wild & domesticated creatures, spiritual beings & demonic ones as well as decorative floral motifs and geometric patterns.

On the roof are four chhatries at each corner with a domed canopy in the middle. The pattern of painted décor is repeated on all five. Interestingly, both in the mezzanine chambers as well as the rooftop chhatries, the ones at the back are more richly decorated than the ones set at the front. There were also painted depictions of mythological stories with the main protagonists been given the prevailing Rajput style dresses of that period. This was an innovation I had never seen before. But then this structure was all about innovations by its very nature. In that sense, it is a ‘rarest of the rare’ building – a medieval era building whose decorative work has survived. Ebba Koch, in her book, speaks of it as a water palace indicating that at one point in time it was in the middle of an artificial mini-lake. There is, however, no sign of any depression to indicate the lake. Of course, the farmers may have filled up the depression but I would prefer to call the building a hunting lodge.

Man Singh Kachhwaha, the man credited by Koch as the probable patron of the place, ruled Amer and was a distinguished nobleman at the Mughal court. The Viratnagar structure probably dates to the early 17th century CE and could have served as a hunting lodge and pleasure pavilion to the Amer princes when they came for a hunt in the nearby Sariska forest.

Viratnagar is an ancient site with many nuggets over thousands of years. The place is spoken of as the site where the Pandavas and Draupadi had taken anonymous exile in the court of the local ruler. The place also has the remains of an Ashokan stupa – the Buddhist site mentioned earlier and an inscription. Located just 70 kms from Jaipur, it is also an easy visit of one were to take a detour while going from Delhi to Jaipur. Not far away is the well-known fort of Bhangarh and the smaller forts of Ajabgarh and Pratapgarh.