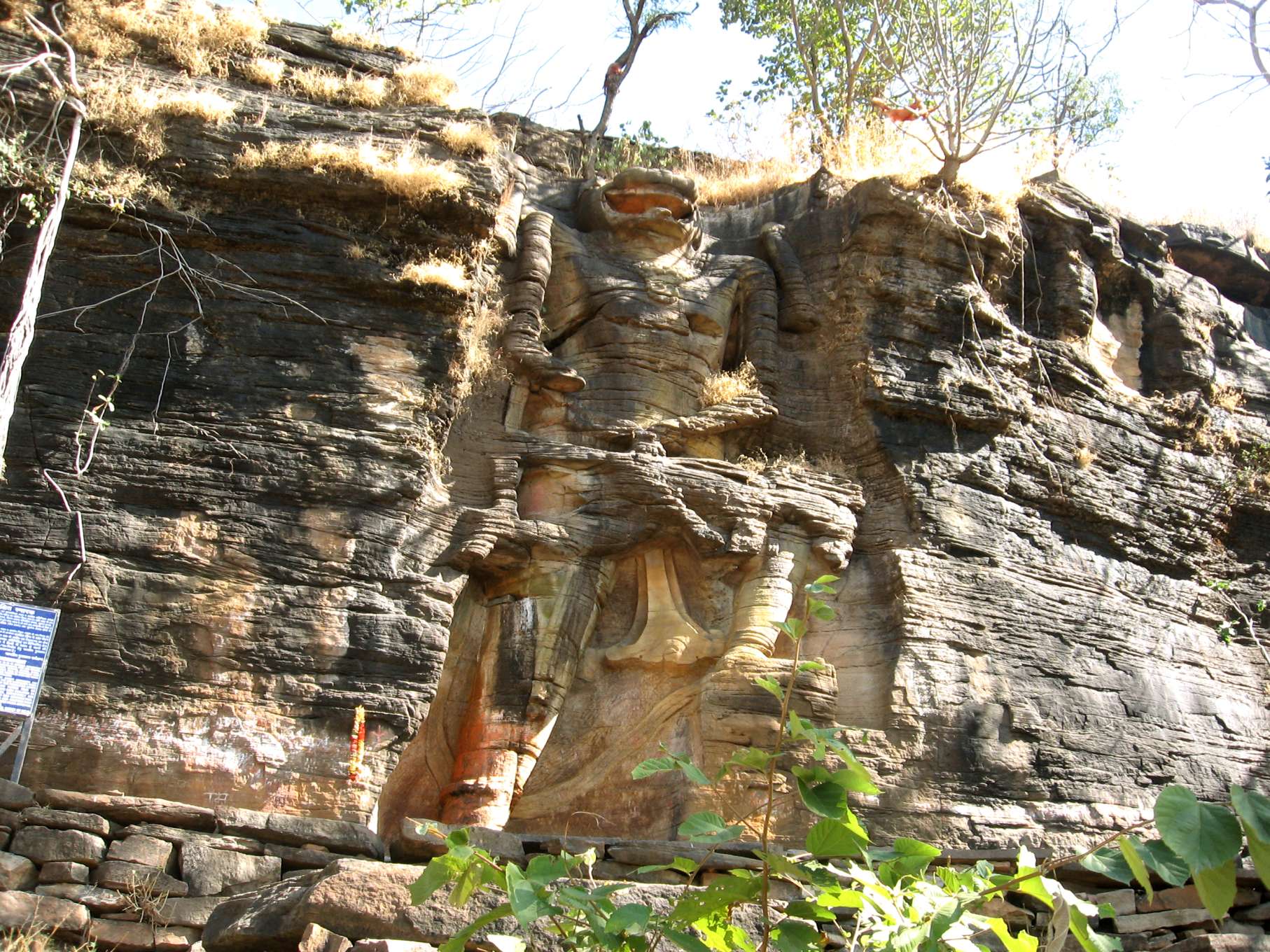 The Lion King of Dudhai

A forest range road leads a visitor from Deogarh in Lalitpur to Dudhai village. While driving through, he might suddenly come across a small bundle of sticks at the edge of the road. A bundle left behind by a forest dweller frightened by the sound of the vehicle, to be reclaimed when the potential danger posed by the vehicle has passed. Not an unusual occurrence in this quiet corner of India.

A regular city dweller might be a trifle perturbed by the setting. On the surface, everything is still and quiet, the only movement being the gentle sway of leaves in the breeze and the only sounds those emanated by tiny insects. But to a person familiar with the ways of a forest, the stillness hides much beneath its tranquil folds.

Further down the road, circling a few low hills one comes across the most-well kept secret of the Dudhai countryside. While the forest here may or may not contain ferocious creatures, a lonely hill-face on the outskirts of the Dudhai settlement is home to a representation of Vishnu in his most ferocious-looking incarnation, the Narasimha.

Carved out of the rock of the hill, the Narasimha is a site to behold. Standing close to forty feet in height, the statue is true to the mythological story. The rock-cut depicts a figure that is half-man, half-lion, its teeth are bared in a snarl and across its thighs is another figure which it seems to be in the process of tearing apart. So marvellous is the image that, at a glance, it looks as if the statue is alive and the story of the death of the asura Hiranyakashipu is being played out in real terms.

Standing by itself in the wilderness, the statue lives a visitor amazed. There are more questions than answers. Who built the rock-cut? In what period? Was it part of a larger shrine that no longer exists or has it always stood like this, by itself? Some local historians feel that the statue could date to the period of the Chandelas, a dynasty that ruled Bundelkhand between the 9th and 13th centuries. Other do not rule out the antiquity of the statue being from the late Gupta period, given the number of iconic depictions of Vishnu’s incarnations that were created then. Whatever its history, there is little doubt that the Narasimha at Dudhai is a marvel that more Indians need to see.

Closer to Dudhai village, the shikhara of some temples are visible. The large depression on the banks of which they stand was once a Chandela irrigation tank, the land of which is now used for cultivation by farmers. The temples are in a fragile state, having possibly been attacked at some point in time, now looking as if a gust of strong wind might blow them away any instant. A good deal of iconography is intact inside the temples. Standing on an elevated platform close by is a stone Varaha, depicting another incarnation of Vishnu. He seems almost like a straggler from history, guarding the temples for centuries against any interlopers.

Stone hangers close to the temples are home to Jain relics, most of them defaced. A walking path leads to the forest nearby. Inside the vegetation is another stone hanger, this one containing a large Ganesha idol along with fragments of numerous other idols that may have come from temples that once existed here. There is also a ruined Yogini shrine here, a small part revealing what would once have been a magnificent circular structure. For some reason, locals are superstitious about the place and do not venture here after dark.

Over time, awareness of Dudhai’s iconic Narasimha has increased. The result has been mixed. While the once-threatening stone quarrying in the hills around has reduced and a stone hanger built around the Narasimha to protect it, its discovery by the neo-faithful has resulted in its face being coloured a pale red. One can suppose it is a small price to pay for its survival. Unwittingly, those who built the hanger around the Narasimha gave it another layer of conformity to the original mythological story – that the Narasimha kills the demon in a place that is neither indoor nor outdoor. Guess some stories do come full circle.